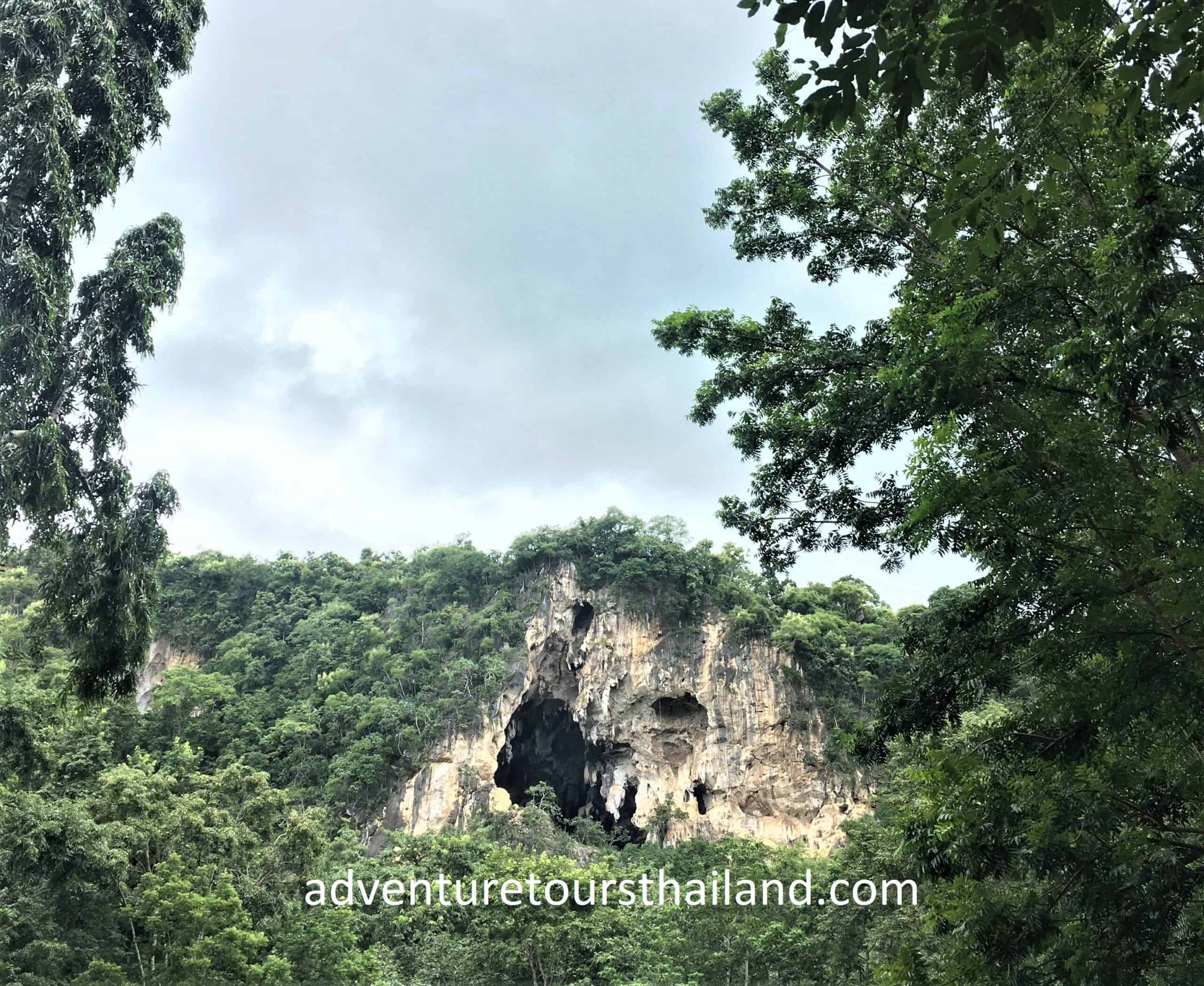 This amazing unknown cave near Pattaya will leave you stunned!

During Covid-19, most of the borders to other provinces in Thailand had limited access, and travel was discouraged between provinces. To comply with the regulations, we decided to explore Chonburi where the party city of Pattaya is located. We found many different places but this cave near Pattaya really stood out.

It is impossible to see the cave near Pattaya from the small road when you are passing. We stopped since we saw a nice pagoda in a temple and we started to explore. We happened to notice a huge cave at the top of the mountain.

Few Locals Know of the Secret Cave in Chonburi

The only human we saw during our cave adventure was a local monk mowing the lawn. We asked this monk how to enter the cave, and he explained the stairwell behind the pagoda would access a smaller cave. He said there are many caves in this mountain, but only a few locals can find them. We followed his pointing finger for the bigger cave, though the monk’s instructions left us confused. As we could not really press him for more details, we left him happily moving along with his grass cutting.

We went to explore the flight of stairs, and it was clear no one had passed through in a long time due to the leaves and shrubbery over the stairs. Moving up a set of faded painted red stairs we could smell the earthy, gamey fecal scent of bats from afar. The cave was dark, but not so much that a flashlight was necessary. There were some old Buddha statues, and trash around the cave; you could see that it was not visited anymore. Some caves in Thailand are well looked after with nice carpets, lights and a candle perpetually lit for Buddha, but this cave has lost its followers.

Crocodile Trail leading to the cave near Pattaya?

Out in the sunlight, we followed the trail around the base of the mountain and there was a small abandoned pond with a huge crocodile statue in the middle. There was a small path leading up a few meters, but the vegetation became excessive, so we turned around. We would’ve needed a machete to pass through, and were not carrying one. You could see there was a small cave further up, but it was nothing we could access without proper tools and clothing. Due to the crocodile statutes on site, this cave probably housed crocodiles and similar at some time in the distant past.

Could the Spirit Guide Us?

Following the mountain base, we were lead to a spirit house, a small shrine inside, which was also neglected. There was a very small trail leading up the mountain behind the house, but the road was blocked with stones and old trees for an unknown reason, so we abandoned that trail as well. We could see a huge hole, a suspected entrance above us, but we could not reach it. There was no way up.

We Gave up Hope to Find the cave near Pattaya, but then…

We gave up on our mission, and went back to the car. We left the temple area, and passed an abandoned Chinese temple on the right side, and an empty house with a big, white Buddha on the roof on the mountain side. We took some photos of the big Buddha and went up on the roof of the house. We noticed something that looked like a stream coming from the mountain, but it had dried up, and disappeared behind a curve. We thought, here goes nothing, maybe this is an interesting trail of some sort even if it is just a dried out stream with rocks. We left the car next to the house, and followed the easy trail for 10 minutes, and came up to this amazing opening in the mountain. On the top of the cave you could see the big hole that we saw from the ground. Finally, we found the secret entrance to the cave near Pattaya!

The Most Amazing cave near Pattaya in Chonburi

Chonburi is not famous for its caves, it’s famous for very good seafood and some temples and of course the Pattaya nightlife. Who could have known that there was this amazing cave near Pattaya?

Don’t let the mobile photos fool you, the cave is as big inside as you can see on the photo above from the outside. Its entrance is a huge arch well over five meters high. The inside photo of the cave does not do it justice at all.

In the middle of the cave floor was a small temple with a roof, but it was also left to its destiny. It probably was very nice when they installed it, inasmuch as Mother nature has taken its toll on it. There were some photos I came across while researching its original construction, and it looked amazing when the various eroded holes through the cave walls shone light through.

If you set your camera for slow exposure, and come when the lights are shining down, the holes in the ceiling of the cave will produce an amazing photo. Since there is nobody here, you will have plenty of time to set up a tripod and wait for the just the right moment.

The cave near Pattaya is relatively easy to climb with normal sneakers, but be aware your hands will get bat guam and calcareous on them, which is a fine sand, so you’ll probably want to bring gloves or have a way to wash up once finished hiking. There were no cavernicoles or other animals in the cave from what I could see to be worried about . The cave is dormant; there is no water nor pools here unless there is rain outside. The cave is very dry, and a bit dusty. It will take you about an hour or less to get up to the circle at the top and there are a few trails leading up there. You do not have to be an expert climber and even kids can do it; just be careful at the top as there are no safety rails, it goes straight out. There is a two meter wide plateau to sit on to have a picnic or just watch the view.

Bring some water, there are no shops nor amenities around the area and you will be thirsty from the climbing and the hot weather. The bats keep in their cave and they are not dangerous. The cave is light, and the entrance and the exit above makes it very bright and there are small holes that filter light in above as well.

Maybe this is why the cave near Pattaya it’s Hidden?

On the right side of the cave there were some ropes leading up four meters on a straight wall and under were a few white sacks. When exploring them, we found out that they actually contained bat poop and people came here to collect it from the high bat cave. Believe it or not, bat guam is actually a high paying commodity by plant growers since it is a good fertilizer. We did not try to climb the ropes, it was out of our league, and it felt like invading someone’s property even if the cave does not belong to anybody. There are no signs leading up the cave near Pattaya from the road and it is not maintained by anyone from what we could see.  We will keep looking for more caves in Thailand subscribe and follow our journey trough amazing Thailand. Use our article about the cave near Pattaya and follow Google Map.

Our Journey Continues to Explore other Amazing Places in Thailand– Join us!

If you want to check our travel writing and adventures in Thailand, please check out this Youtube channel Thailand Travel, and also the Thailand Unseen Facebook group. Don’t forget to subscribe, more amazing Thailand hidden treasures will come!

This site uses Akismet to reduce spam. Learn how your comment data is processed.